National Veterans Day posters from the years 2010 to 2019 as selected by the Veterans Day National Committee.

The theme for the 2019 Veterans Day Poster is: “Service”. Veterans contribute to American society in many ways – not just during their time in active duty.

2018 marked the Centennial Commemoration of the end of World War I on Nov. 11, 1918. The theme for the 2018 Veterans Day Poster was: “The War to End All Wars”. The year’s poster depicts the remembrance poppy and a barbed wire fence. The poppy has been used since 1921 to commemorate military personnel who have died in war was inspired by the World War I poem “In Flanders Fields”.  The barbed wire represents the thousands of miles of wire that was spread by both sides in WWI.

The 2017 poster features the Veterans Affairs motto since 1959 “To care for him who shall have born the battle”, which is a quote from Lincoln’s second inaugural address. Considered one of President Lincoln’s best speeches he affirmed the government’s obligation to care for those injured during the war and to provide for the families of those who perished. There are a pair of metal plaques which flank the entrance to the VA headquarters in Washington, D.C.

The 2008, 2011 and 2013 Veterans Day Posters were all designed by John Magine, a Vietnam Veteran who served in the U.S. Army’s 3rd Special Forces Group.  Not an easy feat as the competition is open to everybody and the Veterans Day National Committee can only select one each year. 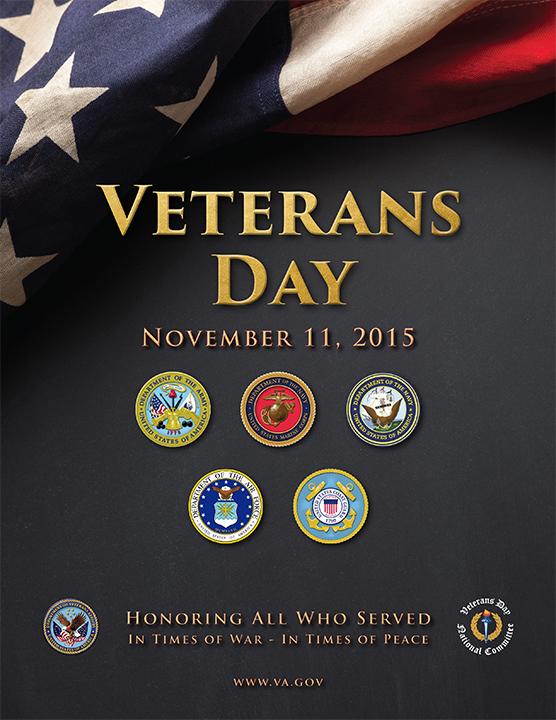