If you’re new to U.S. federal government jobs, you might not understand how the three basic categories of these jobs work. These categories should not be confused with specific job options (we’ll discuss that 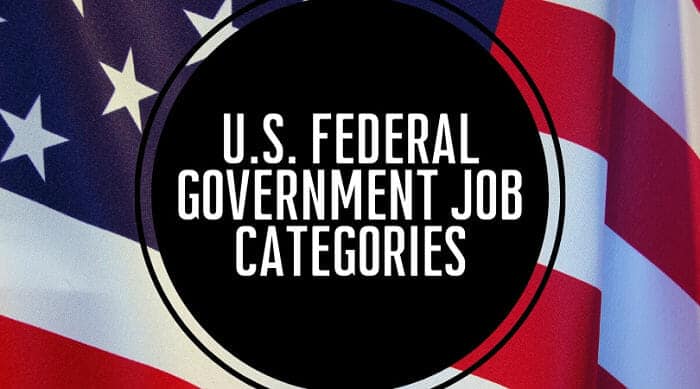 below). The three categories are:

That is a small portion of a list known as an “occupational family” of federal job classifications. They include both Competitive Service classifications of General Schedule (GS positions) and Wage Grade positions.

Each type of federal government job categories has a different definition and application.

Described by official sources as “the smallest category” of federal government jobs. At press time, fewer than 10,000 people are working or have been hired under the Senior Executive Service (SES) category.

Federal government jobs defined as Excepted Service are often “authorized agencies” that are not part of the Executive branch of the federal system. These jobs can include U.S. Postal Service openings, FBI, Secret Service, the National Science Foundation, and many other government agencies including Congress.

These jobs may be advertised at the specific agency seeking new hires, but USAJobs.gov (the official government job site) may not carry these vacancies–there is no requirement for them to be listed there.

If you seek a federal job in the Excepted Service, start your job search at the agency you want to work for rather than beginning at USAJobs.gov.

Of the three categories, Competitive Service hiring is the most standardized and predictable. Job seekers must read each job opening carefully before applying as federal jobs listed in USAJobs stretches across a wide range of agencies, requirements, and application procedures.

Newcomers to USAJobs soon learn that jobs listed there are organized into something called an Occupational Series. A portion of that series is listed above in the beginning of this article, but there are many such classifications falling into General Schedule jobs and Wage Grade descriptions.

Some federal literature refers to these two descriptions as “blue collar” (Wage Grade jobs) and “white collar” (General Schedule jobs)–you can identify these jobs by the WG or GS designation in the job description.

Below you’ll find a list of occupational families for both GS and WG positions as published by the federal government’s Office of Personnel Management (OPM).

Keep in mind that there are subgroups under most, if not all of these categories. For example, under Legal and Kindred Group, job positions are listed to include:

…just to name a few.

Newcomers to this process will need to take some time to explore and review these job descriptions as they pertain to the type of government jobs desired.

Your professional experience may be represented by a category you don’t expect or that doesn’t seem to be directly relevant to your experience–learn the nuances of the federal job listing process before you start applying for best results.