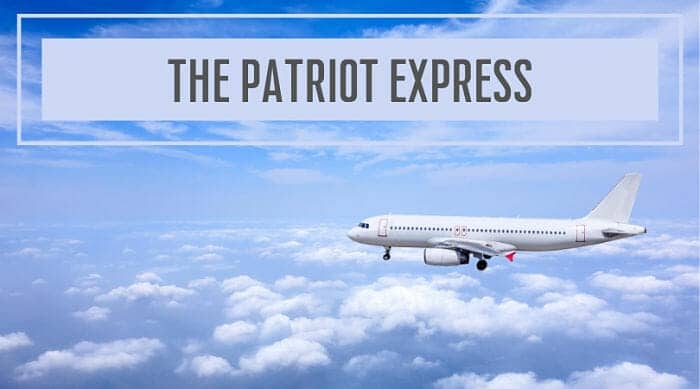 PE flights will often be a combination of those on leave, going to or from new duty locations, and those retiring or separating from military service. The rest of the available seats may be placed on the “Space-A” list. What does this mean?

There are many things about the military world that civilians don’t understand. One of those things is the option for currently serving military members, their families, and even military retirees to fly “Space-A” on military aircraft such as the Patriot Express.

“Space-A” stands for “space available” and refers to the practice of allowing other travelers to fill vacant seats on airplanes flying missions on official business. Not every plane will be full for the official travelers, and it makes sense not to waste the available seats.

We mention this because there are many uses for Patriot Express flights and Space-A travel is a tradition in the military community. If you don’t think you’ll ever need to consider using the Patriot Express outside the official travel channels, you might change your mind after arriving at your first overseas base.

How The Patriot Express Works

Military members and their families receive permanent change of station orders from stateside bases to overseas bases, and vice versa. The Patriot Express is one way to make that travel happen.

Some take assignments from one overseas base to another, and Patriot Express flights may be used to facilities that kind of travel, too, depending on circumstances.

The Patriot Express isn’t just one jet airplane—it’s a whole group of chartered air travel arranged by U.S. Transportation Command and administered by Air Mobility Command. These are commercial airplanes chartered by the Department of Defense to fly specific routes to bring military members and their families overseas and back again.

The Patriot Express once traveled to a wide range of destinations including California and selected bases in the United Kingdom; cuts in service eliminated many of those stops including Los Angeles.

All Pacific-bound troops depart from Seattle-Tacoma Airport in Washington. Which leads us to the next important detail—where PE flights originate.

Which Patriot Express you fly depends greatly on where you are headed. Those departing the United States for overseas bases in the Pacific will depart from Seattle, Washington’s Air Mobility Command (AMC) terminal to the following destinations—what are listed here can safely be assumed to be round-trip flights, though mission requirements and other factors may change that on individual flights:

Those departing from the East Coast may use the AMC terminal at Baltimore Washington International for the following destinations:

Some East Coast departures will be from Naval Station Norfolk to the following destinations:

Some flights may or may not have stops along the way; much depends on variables including mission requirements, ops tempo, threat levels, and other concerns.

Signing Up For Patriot Express Travel

Those who are traveling on official business (PCS, TDY, permissive TDY, travel as part of professional military education, etc.) are not required to sign up for Space A travel, their seats are reserved and they will register for their flights as directed by the local command.

Those who are not traveling on official business but are flying with leave paperwork are required to sign up for Space A travel from a specific passenger terminal (see above) and may or may not be assigned a seat on a Patriot Express aircraft—it could be any departing flight that is going to the traveler’s destination.

Those flying on orders do not pay a fee as opposed to those flying Space A, who will be charged a small fee for travel. This fee is usually charged in cash only—ask before you rely on a different form of payment.

When you fly PE, you should expect to be present for a roll call at the passenger terminal you depart from. In some cases there may be TWO roll calls in situations where the PE flight originated from one location, and lands in another that is not your final destination. There may be one roll call after your plane lands, plus another after the check-in time for the last space-required passenger. Be sure to ask about roll calls when checking into your flight.

Things To Remember About The Patriot Express

Flying on orders is no problem for most unless there are mechanical problems, weather delay issues, or even mission-essential activities that require delays or cancellations of certain flights. But for those who fly Space A on a PE flight, there are a few things to remember. One of the most critical issues to make not of? The timing of your travel—does it coincide with PCS season?

Permanent Change of Station season involves a high volume of military travel, especially for the Patriot Express. Space A travelers are frequently warned about this high-traffic time of year–so why is this a concern for those who don’t have to worry about a seat on the aircraft due to having travel orders?

Processing times for the flights, luggage concerns, and overall comfort of the experience will depend greatly on the sheer volume of passengers scheduled for any one flight.

Best advice? Arrive very early for Patriot Express travel during PCS season and expect delays, unusually-timed departures that may limit your access to typical travel accommodations like coffee shop drinks and airport restaurants. Knowing these issues and preparing for them makes overseas travel via PE far more relaxing and comfortable.