Patriot Day, officially known as National Day of Service and Remembrance, is observed every Sept. 11th in honor of the individuals who lost their lives as a result of terrorist attacks on Sept. 11, 2001.

“On this anniversary, I invite all Americans to thank our Nation’s incredible service members and first responders, who are on the front lines of our fight against terrorism…The spirit of service and self sacrifice that Americans so nobly demonstrated on Sept. 11, 2001, is evident in the incredible response to Hurricanes Harvey and Irma.”

How Patriot Day is Observed

The  9/11 Memorial & Museum traditionally observes the anniversary with a ceremony beginning at 8:46 a.m. EST, at the 9/11 Memorial Plaza at the World Trade Center site in lower Manhattan. The museum is accessible only to family members of victims in the 2001 and 1993 attacks during the ceremony. During the evening the public can view the Tribute in Light and the plaza is open to the public.

A hijacker flew American Airlines Flight 77 into the southwest corner of the Pentagon on 9/11, killing 184 people — all on board the plane and many more inside the building, which was heavily damaged. An important addition to the Pentagon grounds is the National 9/11 Pentagon Memorial, which sits on two acres of land right outside where the jetliner struck, and honors those who were lost.

There are 184 memorial benches dedicated to each of the victims, and they’re organized in a timeline of their ages, from the youngest victim, 3-year-old Dana Falkenberg, to the oldest, 71-year-old John Yamnicky.Each bench contains a pool of water that reflects light in the evenings, and they’re all positioned in a way that distinguishes the victims onboard the airplane from those inside the Pentagon. The benches for the 59 jetliner passengers are positioned so a visitor will face the sky when reading the victim’s name. Those dedicated to the victims inside the building have the victim’s name and the Pentagon in the same view. 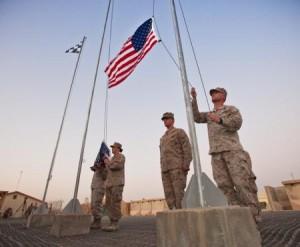 President George W. Bush signed the resolution into law (Public Law 107-89) on Dec. 18, 2001. Through wide-spread support from the 9/11 community Congress designated Sept. 11th as the “National Day of Service and Remembrance.”

(1) State and local governments and the people of the United States to observe Patriot Day with appropriate programs and activities;

Patriot Day is observed on Sept. 11th and Patriot’s Day is celebrated on the third Monday in April. Patriot’s Day is a regional holiday celebrated in New England which commemorates Paul Revere’s ride and the battle of Lexington & Concord during the Revolutionary War. The Boston Marathon is also run on Patriot’s Day every year.

Patriot Day is not a federal holiday, businesses and schools do not close in observance of the occasion, although memorial ceremonies for the victims are held.