Home » How to Become a Military Doctor

If you have your eye on both the military and med school but can’t decide which career to choose—you don’t have to—you can do both! You can serve your country, travel the world, and be a medical professional in the greatest military on the planet. There are two paths to becoming a military doctor, depending on how immersed you want to be in the military while getting your medical degree. To help you choose, we have put this post together to see if becoming a military doctor is right for you.

The Two Paths to Military Medicine 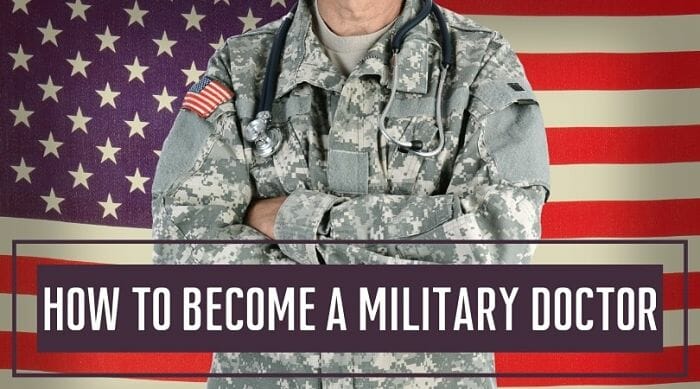 To become a medical doctor in the military, you have two choices: the Uniformed Services University of the Health Sciences (USUHS) or the Health Professions Scholarship Program (HPSP). Each program has advantages and disadvantages based on your personal preferences. If you attend the USUHS, you will be in the military from the get-go. If you take the HPSP path, you will attend a civilian med school and are commissioned in the U.S. military after graduating.

The Uniformed Services University of the Health Sciences (USUHS)

The USUHS is also known as “America’s Medical School.” It was started by Louisiana Congressman F. Edward Hébert as the “West Point for doctors.” It’s located on 100 acres of wooded land on the grounds of Walter Reed National Military Medical Center in Bethesda, Maryland. USUHS is the foremost medical education and research center for the U.S. armed services. If you are accepted to the USUHS, you will be an active-duty service member, and your education will be paid for by the U.S. government. The school accepts both civilian and military applicants for commissioning into the Army, Navy, Air Force, and U.S. Public Health Service. It is important to note that there is a growing interest in the school because there are a lot of enlisted members interested in becoming military doctors.

Since the school was established 40 years ago, it has produced more than 5,000 doctors, 70 dentists, 660 nurses, and 1,300 medical research doctors. All of them have become career military medical officers serving our nation. USUHS has a year-round, four-year program. Their program is 700 hours longer than any other U.S. medical school. Students come from all geographic, socioeconomic, racial, ethnic, and cultural backgrounds.

HPSP is the more common choice among the two. The difference between USUHS and HPSP is that in the HPSP program, you get to attend any medical school you choose (you have to get accepted first). Your tuition is paid for by the U.S. Government, and you get a monthly stipend (income)! Medical training is the same as your civilian peers, but as an HPSP recipient, you have to go to a modified form of basic military training. Training usually occurs during your second year of medical school. During your third and fourth clinical years, you get the chance to rotate at military hospitals if you choose.

The biggest difference between USUHS and HPSP is your relationship with the military. As a USUHS student, you are an active duty officer and have a bigger commitment to the military while in med school. If you are an HPSP student, you are commissioned as an officer in the Individual Ready Reserve. Either way, you will finish med school in the same amount of time as your civilian counterparts.

There are other areas that differ between the two programs, but they both have the same end-result—med school and a career as a military doctor. Let’s explore the two programs and their differences:

You will plunge into the military lifestyle right away. You will wear your military uniform to class, and you will be on active duty through all four years of med school. During your first 18 months of training, your instructors will be both military and civilians. You will take part in classes, labs, and medical field exercises. During your next phase of training, you will experience one year of rotations at military medical facilities. Your final 18 months of rotations will help guide you toward a residency and auditioning for your preferred program. During the last phase, you will have the chance to serve at military treatment facilities worldwide.

As an HPSP scholar, med school is not much different than your civilian peers. You take the same classes, but don’t have to wear your uniform when attending school. You will have to attend officer training and take part in one 45-day training session for each year you get scholarship funds. During training, you can still study for exams for your med school classes, do research, or perform clinical rotations at military treatment facilities. You will wear your uniform during training periods.

Before enrollment, you must complete a 2 to 14-week officer orientation program (depending on the military service). During training, you’ll learn about the customs and traditions of military life to help you transition to the military. You attend this training if you have had no prior commissioned officer experience. After training, you’ll go to USUHS to start your medical education.

During your first or second year, you will complete a 2 to 14-week officer orientation program (depending on the military service). During training, you’ll learn about the customs and traditions of military life to help you transition to the military. You attend this training if you have had no prior commissioned officer experience.

Once you are enrolled in the School of Medicine, you will serve on active duty as commissioned officers. Either as a Second Lieutenant in the Army or Air Force, or Ensign in the Navy, or Public Health Service. You pay no tuition or fees, plus you’ll get the full salary and benefits of an O-1 for all four years at the USUHS. Benefits include free medical care for you and your eligible family members, a housing allowance, and 30 days paid leave each year. There’s more—books and lab equipment are also included at no charge. Once you graduate, you will begin your career as an O-3. Your base pay, housing allowance, and food allowance will be around $100,000 (based on the 2020 pay chart).

Once you are accepted for the HPSP, the government will pay your tuition, provide a monthly living stipend ($2,400 per month) and reimburse you for required books, equipment, and supplies. Your stipend will be paid to you through direct deposit twice a month. As you buy needed items for school, keep track so you can submit expense reports. You will spend 45 days each year of med school training with the military. During those periods, you’ll get the same pay and benefits as an active-duty Second Lieutenant in the Army and Air Force or an Ensign in the Navy. You also get a $20,000 signing bonus for joining the Army, Air Force, and Navy.

Since the U.S. military is paying for your med school, it’s only fair you have to pay it back—so to speak. You will pay it back through a 1 to 1 payback in military service. If you completed med school in four years, you are bound to be a military doctor for at least four years. Your pay and benefits after graduation will be the same as the USUHS program.

You must be at least 18 years old at the time of enrollment but no older than 36 as of June 30th of your enrollment year. You must be a U.S. citizen and meet the physical, medical, and security requirements for becoming a commissioned officer in the military. If you are already in the military, you must have approval from your military department as part of your application. This also applies if you are in one of the service academies, ROTC, or a member of one of the Reserve Components.

How Do I apply?

If you have more questions or need info, the best place to start is a recruiter. It is smart to talk to recruiters from several services, so you know all of your options. They can answer all of your questions and guide you through the application process.

Here is a side-by-side comparison between the two paths to becoming a military doctor.

Source: Uniformed Services University “What You Need to Know”

If you have your mind set on becoming a military doctor, there are two great choices. After reading this article, we hope that it will help you pick which path is the best for you—attending USUHS or receiving an HPSP scholarship. No matter which route you take, you can rest assured that you will be serving your country by providing our troops with the best care anywhere!