National Medal of Honor Day is observed every year on March 25 and is dedicated to Medal of Honor Recipients. Each branch of the U.S. military awards the Medal of Honor to those who have distinguished themselves “conspicuously by gallantry and intrepidity” above and beyond the call of duty, according to the Department of Veterans Affairs official site. 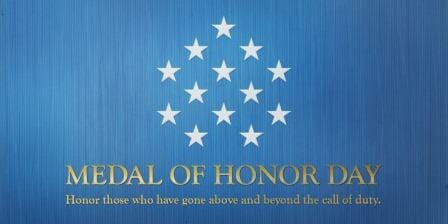 Origins of the Medal of Honor (MoH)

There were medals awarded that served at the time as forerunners of the MoH. These included the Fidelity Medallion awarded in the late 1700s to only three persons associated with the capture of a spy associated with Benedict Arnold; another precursor to the MoH was George Washington’s Badge of Military Merit. The last “proto-MoH” was the Medal of Valor, approved by President Abraham Lincoln in 1861.

In 1862, the Army Medal of Honor was created thanks to a resolution introduced by the Senate Committee on Military Affairs, Senator Henry Wilson. In 1915, Navy, Marine Corps, and Coast Guard members were authorized to receive the Medal of Honor, and by the mid 1960s the United States Air Force also had its own version of the MoH.

Text Of The MoH Resolution

The version of the measure introduced by Henry Wilson and signed into law by President Lincoln includes the following:

Resolved by the Senate and House of Representatives of the United States of America in Congress assembled, That the President of the United States be, and he is hereby, authorized to cause two thousand “medals of honor” to be prepared with suitable emblematic devices, and to direct that the same be presented, in the name of the Congress, to such non-commissioned officers and privates as shall most distinguish themselves by their gallantry in action, and other soldier-like qualities, during the present insurrection (Civil War).

Obviously the Medal of Honor has evolved quite a long way since this text was written, and far more than the original 2,000 medals authorized have been awarded since the mid-1800s.

The original MoH criteria includes the following as presented on the Medal Of Honor Society official site. The medal may be awarded for meritorious actions above and beyond the call of duty:

The first Medal of Honor recipient was Army Private Jacob Parrott. That MoH was awarded in 1863 as part of a Civil War mission behind enemy lines. Since that time, more than 3,500 Medals of Honor have been awarded.

Everyone who wears the Medal of Honor is included in the official MoH Honor Roll. There are military benefits associated with being on this list including an increase in military retirement pay, military burial honors, and eligibility to be interred at Arlington National Cemetery (assuming the recipient was not already eligible for these benefits).

The first Medals of Honor were awarded on March 25, 1863. When Congress passed a resolution in 1990 establishing National Medal of Honor Day, March 25th became the official nationwide holiday honoring the medal and its recipients.

National Medal of Honor Day is not a federal holiday; banks do not close, U.S. Post Office facilities remain open, and there are no school closings. Many of the ceremonies and other forms of observance take place on military bases, national cemeteries, and in local communities. It is not uncommon for the President of the United States to visit or gather MoH recipients to pay respects to their sacrifices. Visits to Arlington National Cemetery or similar facilities are also traditional ways of paying respects on March 25th.

Public ceremonies aren’t the only way to commemorate March 25th; private citizens can do several things to observe National Medal of Honor Day: