Home » What Is Information Warfare?

What is information warfare? The definition according to the Central Intelligence Agency isn’t strictly defined; the military services and Pentagon agencies who conduct information warfare, or IW, don’t necessarily agree on what IW means. Information warfare can be a combination of lies, manipulated truths, manufactured media, or in some cases exploiting human nature to sow confusion. 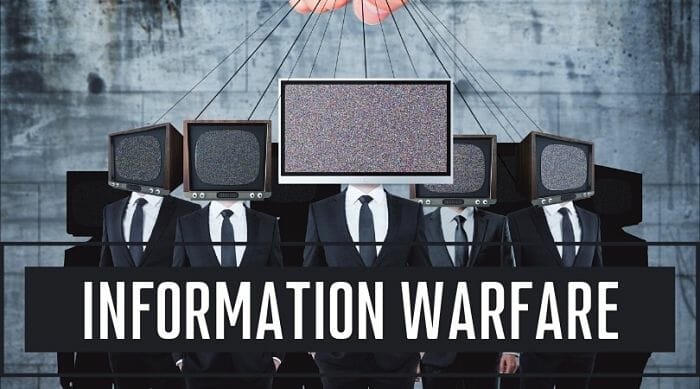 That said, some agencies (including the U.S. Air Force’s Air University) tend toward viewing information warfare as a battle fought in cyberspace, online and over computer networks.

That is a bit of an oversimplification as information warfare has existed far longer than the internet or computers in general. It’s tempting to think of IW as something exclusive to the realm of computing, but there are examples of IW throughout history. The Chinese philosopher Sun Tzu is on record saying that all warfare requires deception, and that is an excellent way to begin thinking about the concept.

IW can involve online computing, radio transmissions, television, and other electronic means, but can also be as crude as a “leaflet bomb” or airdropped “care packages” containing what may appear to be food and medicine from a legitimate relief agency but which also contains propaganda, fake news, or instructions on how to surrender.

Information warfare goes hand-in-glove with military intelligence. Whether your goal is to deceive an enemy into thinking your next attack will happen someplace other than the real target or to convince civilians across enemy lines not to resist invading forces, the use of information as a weapon of war is as old as warfare itself.

Sometimes the information itself is weaponized to mislead or confuse, other times it does not matter what the information is–the sheer volume of data is used as a weapon in the form of online hacking attempts such as a distributed denial of service (DDS) where millions of emails flood a server at the same time or similar tactics.

IW is asymmetrical–targets in America are just as vulnerable to IW as troops and computer systems used in a theater of operations. Information warfare does not have to originate from the front lines of a conflict, nor does any official conflict have to be declared.

Consider the story of the Trojan horse in Virgil’s the Aeneid. Information was used in this classic story to fool the enemy–the “weaponized information” in this case? The idea that the Greeks had surrendered and subsequently left a tribute for their valiant foes in the form of a giant “Trojan horse” which just happened to contain troops from the Greek army waiting to spring an attack once the horse was within the walls of the city.

A great real-world example of IW can be found in World War Two. Planning for the D-Day invasion of Normandy included giving the Nazis the opportunity to “discover” information that led the Germans to believe D-Day would happen at a location in France adjacent to England; misleading radio traffic, lies spread by double agents, and an effort by Allied forces to create a fictitious invading force which History.com says was supposedly to be led by General George Patton.

Information warfare can also come in the form of propaganda. Another World War Two-era example of IW is found in the character known as Tokyo Rose, a fictional character broadcasting messages from Radio Tokyo intended to lower the morale of American troops broadcast six days a week in 1943. Propaganda is definitely part of IW, but not the entirety of it.

The concept of Russian interference in the American political system, especially when that interference comes in the form of misinformation spread over social media, is one of the very best examples of contemporary information warfare methods and tactics.

Photoshopped pictures showing a political opponent as a more aged, fragile version of themselves is one tactic that is right out of the old Cold War playbook; discredit your adversary by making them appear weak, too fragile to do the job, etc.

Deep fakes, or media (often videos) that have been manipulated to show events that didn’t occur in reality is another information warfare tactic used to discredit an enemy or sow confusion within the target country.

“Deep fakes” is a bit of loosely used techie jargon that should never be confused with the notion of the “deep state,” which is a conspiracy theory used to propagate the idea that there is a shadow government or cabal that is “secretly running things.”

The concept of the deep state itself could be a Russian disinformation campaign similar to the easily-debunked notions spread by QAnon regarding secret societies of politicians who run child enslavement rings around the globe. The hallmark of this particular flavor of information warfare is that none of the claims is verifiable–you have to take the word of some insider or “a guy who knows.” Another telltale sign? Singling out a targeted, but broadly defined demographic (“the liberals” or “the Jews,” for example) to blame for the conspiracies.

The U.S Department of State official site reminds readers that disinformation and misinformation of this type may involve the use of certain facts that are true used out of context, or in deliberately misleading ways. “Disinformation can include authentic material used in a deliberately wrong context to make a false connection, such as an authentic picture displayed with a fake caption.”

Disinformation also takes the form of news sites pretending to deliver real journalism but substituting hyperbole, bad information, manipulated information, etc. It can also include sites that are designed to appear like real news organizations such as CNN or ABC but are not actually run by those companies.

Information warfare occurs online all the time. Hacking, whether black hat or white hat, is definitely a tool of the information warrior–that can involve the deliberate compromise and destruction of a network, computer, or other resource, but it can also include compromise that isn’t so obvious–consider the hacker who gains access to a network and leaves themselves a “back door” to access and retrieve data at will.

In the guise of an attempt to steal or sell information (or access to it) this may be considered criminal activity only; when done by a government (or in the case of some Russian state-sponsored hacking, by proxies not directly associated with the government) it may fall into the IW realm.

But that’s not all–consider the kind of information warfare where a government sets up a computer network they actually intend to be compromised by an enemy hacker; misleading information, manufactured data that has no basis in reality, and bogus official documents about troops strength levels, deployments, and other information can fall into the hands of an enemy via these “honeypot” networks. When the enemy reacts to the bogus data, they have fallen into the trap.

Information warfare has many uses, and can be as simple as a leaflet campaign or as sophisticated as videos or photos digitally manipulated to show a moment in time that never really happened.

At the end of the day the tactics don’t matter as much as the end results. An enemy that is tricked into thinking an attack will happen far from the actual invasion has been defeated in the IW arena but however long-term or short-term that defeat actually depends greatly on the followup.

The same is true with attempts to discredit the political process of a rival country by casting doubt on the legitimacy of an election or legal process by manipulating posts on social media. The methods vary greatly depending on the goals, but the end result is always the same–some form of disinformation is spread, or some vulnerability is exploited using data, ideas, media, and human nature.