Home » How to Use the GI Bill to Study Overseas

Due to the program’s tremendous educational benefits, veterans frequently ask if it’s possible to use the GI Bill to study overseas. It absolutely is, and in this article, we’ll explain how veterans can use their GI Bill benefits to attend a foreign university. 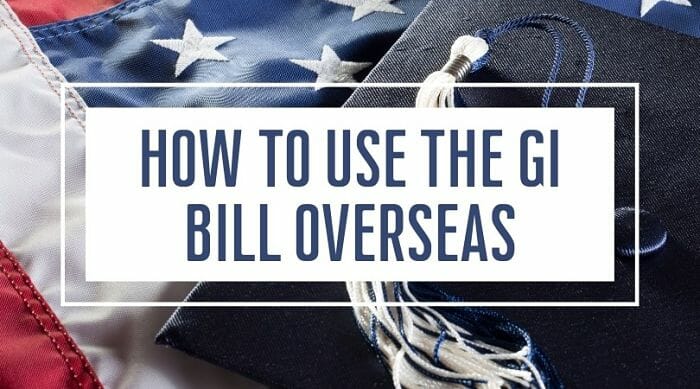 The predecessor to what we now know as the GI Bill began with the 1944 Servicemen’s Readjustment Act, which aimed to provide troops returning from World War II the housing and education support necessary to transition back into the civilian world.

Today, the Department of Veterans Affairs administers the latest variation of this education benefit, known as the Post-9/11 GI Bill. This current program offers qualified veterans the following comprehensive benefits:

And, in addition to providing veterans the ability to pay for school or job training in the United States, the Post-9/11 GI Bill can also be used to pay to study overseas, which we’ll discuss in the following sections.

One of the primary benefits to the Post-9/11 GI Bill is its monthly housing allowance, a tax-free stipend paid to veterans while enrolled in school. This payment provides veterans – especially ones with families – the financial flexibility to actually take time off work post-service to attend school full-time.

As such, one of the first questions veterans ask about studying overseas is, even if I’m allowed to study at a foreign school, will I also receive my monthly housing allowance overseas?

Yes, you absolutely can still receive your housing allowance while studying overseas with the GI Bill!

However, due to the logistical challenge of determining cost of living adjustments outside of the United States, veterans using the GI Bill overseas receive a flat-rate stipend. Specifically, these veterans will receive half the US national average housing allowance, which is based on the Department of Defense basic allowance for housing (BAH) for E-5s with dependents.

With that hurdle out of the way, here are the steps a veteran actually needs to take to use his or her GI Bill benefits to study overseas.

The Department of Veterans Affairs will not accept degrees – and provide GI Bill benefits – for any university overseas. Rather, the VA will accept degrees from programs similar to the ones provided by accredited US colleges and universities. And, for private universities abroad, the VA mandates that these institutions have comparable degree programs and entrance requirements to public universities in that same country.

Having outlined these restrictions, the first thing a veteran needs to do on the path to studying overseas is confirm that the VA has actually approved your foreign school for education benefits.

Step 1a: Asking a Foreign University to Request VA Approval

If you find out that your foreign school hasn’t been approved by the VA, all is not lost.  Due to the massive number of overseas institutions, the VA simply can’t compile a list of every possible school. As such, they’ve established a system for foreign schools to apply directly with the Department of Veterans Affairs for approval.

However, it’s important to note that an actual school official – not the veteran – must be the one to request approval with the VA. As such, if you’d like to attend a foreign university that’s not approved, you’ll need to ask an official from that school to apply for approval directly with the VA. Once approved, you can then use your GI Bill benefits at this school.

NOTE: If the VA does not approve the program, the veteran will need to pay all tuition and fees at the foreign school.

This step parallels the application process for using your GI Bill benefits anywhere. Veterans first need to apply directly with the Department of Veterans Affairs to confirm their eligibility.

Once the VA confirms GI Bill eligibility via a Certificate of Eligibility (COE), the benefits received by veterans will vary depending on:

Assuming you receive 100% GI Bill benefits, the VA will pay overseas tuition up to the annual maximum reimbursement rate, typically adjusted upwards for inflation every year.

Next, the foreign school’s certifying official will confirm your enrollment directly with the Department of Veterans Affairs. And, veterans should note that they will not receive any GI Bill payments until the VA has received and processed this enrollment information.

Recognizing this, veterans should plan on having cash on hand to cover several months of living expenses in the event of a processing delay between the foreign university and the VA.

As stated above, veterans may experience a lag between beginning classes overseas and receiving their first GI Bill payments from the VA. Make sure to have enough money to cover all living expenses until these payments begin.

Next, veterans need to coordinate directly with the foreign school to confirm A) program acceptance, B) enrollment timelines, C) payment of tuition and fees (in case these surpass GI Bill maximum benefits), and D) housing.

Step 4: Authorize School Officials to Release Information to the VA

Lastly, veterans using the GI Bill to study overseas need to actually provide their foreign school written permission to release information directly to the Department of Veterans Affairs. If veterans don’t do this, they’ll likely face further delay in receiving their benefits – a potentially challenging situation when living overseas.

And, related to this authorization, veterans should tell their foreign schools whether they plan to study there for multiple years, as these schools generally only certify their students with the VA for one academic year. To avoid further delays in payments, veterans should ideally provide their schools at least four months’ notice to re-enroll them for a second year, as any less time could cause a delay in processing with the VA.

Veterans shouldn’t view the GI Bill as simply a means to a traditional college education in the United States. As the above article illustrates, the GI Bill can also be used to study overseas at foreign universities, providing outstanding travel, cultural, and language opportunities for veterans.