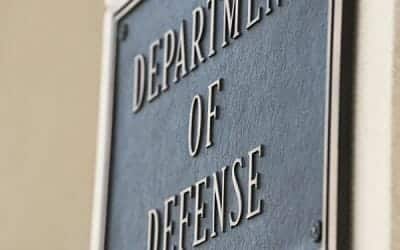 The United States Department of Defense (DoD) is a federal agency described as an Executive Branch department. The DoD is described as being among the largest employers in the world; there are more than one million active duty service members, more than 800 thousand members of the Guard and Reserve, and more than 700 thousand civilian employees.

The Department of Defense headquarters is located inside the Pentagon operating with the mission statement to provide the nation with military forces to act as a deterrent and provide national security.

The official date of the creation of the Department of Defense may be a bit misleading for some as the nation has always had an entity that operated in a similar capacity; but as we’ll learn below the road to the DoD as we now know it was a long and winding one.

A Brief History of the Department of Defense

In 1789 the first United States Congress convened and drew up legislation to create the U.S. War Department, the first hint at what would later evolve (slowly) into the Department of Defense. The War Department would be responsible for both Army and Navy operations until the Navy Department was created.

In the aftermath of the War of 1812, lawmakers decided that the War Department needed reforming; it was reorganized into a group of bureaus with the bureau chiefs acting as advisers with the Secretary of War presiding over them. With the start of the Civil War, the United States War Department received expanded duties including the recruitment and training of two million troops from both the regular army and the volunteer force. Another chain of command handled wartime operations.

At the end of the Civil War, the U.S. War Department also found itself in charge of freed slaves, refugees, and responsible for support of new governments in the south. There would be many changes in command structure, staffing, and basic organization of the War Department all the way up until the end of World War Two, when the most significant changes would begin.

Big Changes For The War Department

The National Security Act of 1947 brought big changes, creating a unified command then known as the National Military Establishment, or NME. A presidential request for the creation of a unified department of national defense resulted in Congress debating the place of the post-war military in America and whether there was any danger of giving the executive branch of government too much authority over the armed forces.

The entity known as National Military Establishment was thereby redesignated as the Department of Defense on Aug. 10, 1949. There was clarification about how much power the Secretary of Defense has over the various branches of military service and better defined the overall chain of command.

Important 20th Century Modifications to the Department of Defense

Since then a few refinements in the DoD have taken place. The Defense Reform Act of 1958 was in part needed to address the requirement of civilian control over the military; under the Act the chain of command starts with the president as commander-in-chief, under whom the SECDEF, Chairman of the Joint Chiefs of Staff, and combatant commanders fall. There is no military command exercised by the Chairman of the Joint Chiefs of Staff and as a presidential advisor the civilian control of the military issue is addressed.

Another important change came as a result of the Goldwater-Nichols Act of 1986. This law establishes the Chairman of the Joint Chiefs of Staff as the senior ranking member of the Armed Forces and makes the chairman the primary military advisor to the president. Again the lack of direct military command by the chairman is reinforced.

Today, the Department of Defense is run by the Secretary of Defense operating as a cabinet-level position reporting directly to the president and has three military departments beneath it; the Departments of the Army, Air Force, and Navy (under which the United States Marine Corps falls).

Most observances of the Department of Defense birthday will happen the day or week of Aug. 10th each year.

As with many such observances, the Department of Defense birthday is not a national holiday, there are no days off, and many of the activities dedicated to celebrating this milestone are done at the organizational level. The DoD birthday events held at military bases or federal government buildings around the world may include cake cutting ceremonies, dining-outs (likely not as common for the DoD birthday as they are for Army birthdays and those celebrated by other branches of the military), media campaigns and social media hashtag events like the one done on the DoD official Facebook page in 2018.

That campaign included social media posts saying, “We’ve got a birthday coming up…and we want to celebrate it with you! Add our birthday frame to your profile photo. Just click “update profile picture,” then click “add frame” and search “defense birthday” to find it” with suggested hashtags reading #KnowYourMil and #DoDSince1949.

The most common way to help observe the DoD birthday is to thank a servicemember for answering the call of duty, contributing time or funds to support organizations for federal employees and military members, etc.

Current federal employees and military members and their families may help out through participation in the Combined Federal Campaign, which is an organization that describes itself in its mission statement as working to “…promote and support philanthropy through a program that is employee focused, cost-efficient, and effective in providing all federal employees the opportunity to improve the quality of life for all.”

The Combined Federal Campaign runs its charitable work with “a volunteer group of Federal employees who work with experienced nonprofit executives” in their communities to raise funds and donate them to CFC-approved charities.