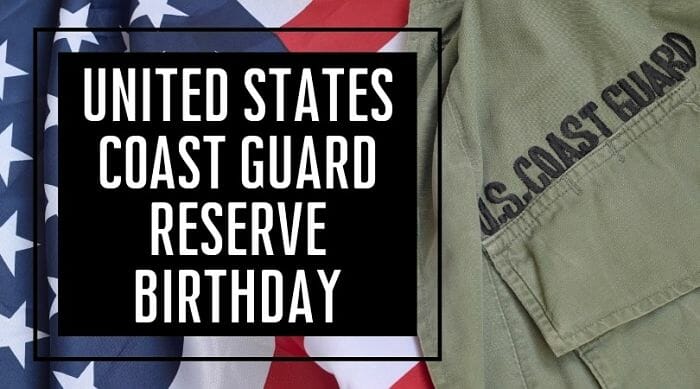 Feb. 19 is the official birthday of the United States Coast Guard Reserve. Officially set-up in the late 1930s as a “civilian reserve” operation, it was non-military in nature. The Coast Guard Reserve Act of 1939 was the earliest incarnation. The Reserve soon evolved into something much greater than the original authors of the law had envisioned.

The Coast Guard Reserve birthday will be on Saturday, Feb. 19th, 2022.

The “regular” Coast Guard was formed in 1790. It wasn’t until much later that Auxiliary and Reserve operations would be added to this branch of military service. But when the need arose, there were thousands of people ready to answer the call.

A Brief History of The Coast Guard Reserve

The original version of the Coast Guard Reserve, the “1939 version,” was known as the Coast Guard Auxiliary. A federal law passed in 1939 authorized the Auxiliary. It was intended for civilian boat owners who as part of their service in the Auxiliary would be responsible for promoting water safety, seamanship, and other water-based missions.

The 1939 version would not last. In fact, a few short years later in 1942, anyone joining would be recruited as a member of the “regular” reserve. 1942 was also the year that the Women’s Reserve was created. At the time, there were more than 200,000 reservists, men and women alike, serving in the Coast Guard during World War Two.

The Coast Guard Reserve at The End of World War Two

When the war ended, a large number of these reserve members were discharged or “released to inactive duty.” The Women’s Reserve was disbanded around the same time, but would be reauthorized during the Korean conflict.

There were many such military and military-related operations that would disband, shut down, or run minimally at the end of the war. They were reactivated later out of necessity in Korea, Vietnam, the Cold War, etc.

In spite of this, there was discussion of disbanding the Coast Guard Reserve following Vietnam. But this did not happen. In the early 1970s, the very first involuntary recall of Coast Guard Reservists was made in support of flood recovery efforts near the Mississippi, Ohio, and Red River regions.

There was also a notable Coast Guard Reserve effort made during the 1980 Mariel Boat Lift from Cuba. Reserve Units were such as the Air Force Reserve were utilized starting in the 1990s to be used more and more. They augmented the regular active duty mission of the United States Coast Guard.

Though, training and mobilization missions weren’t the only duties of the Reserve. The 1980s saw the creation of Port Security Units. They were deployable and could be used to handle administrative work and provide manpower to more fully round out a unit’s number of available service members.

The late 1980s were a busy time for the Coast Guard and its Reserve operation. Coast Guard Reserve members supported missions. They provided local assistance for Hurricane Hugo, a San Francisco earthquake, and an oil spill that resulted from the crash of the Exxon Valdez oil tanker in Alaska.

Big Changes for the Coast Guard Reserve in Modern Times

1993 led the Coast Guard Reserve, like many other parts of the U.S. military, to experience a downsizing and consolidation. It streamlined the service and made it more efficient. The downsizing was only the beginning of new efforts. A Coast Guard “Sea Partner” training program on how to protect ocean environments began in 1994 and continues in modern times.

1994 also brought with it a restructured version of the Coast Guard’s reserve program. Many Reserve units were eliminated and their troops re-assigned to active duty units instead. Port Security Units are basically the Reserve units of today. All others work in an active duty unit when doing their Reserve time.

In 2010, Reservists supported rescue and recovery operations related to the earthquake in Haiti. Another major oil spill off the coast of Louisiana brought more than 4,000 Coast Guard Reserve members to help in the aftermath of the sinking of the Deepwater Horizon and the resultant oil spill. It has been said to be the largest oil spill in American waters according to some sources.

Reservists would also play an important role in recovery efforts following Superstorm Sandy in 2012. Since Sept. 11, 2001, over 8,500 Coast Guard Reservists have been called into active service.

The Coast Guard Reserve birthday is not a federal holiday and there are no closures or time off scheduled specifically in observance of the birthday. However, many will have the day off if the Presidents’ Day holiday falls on Feb. 19th.

Those celebrating the Coast Guard Reserve birthday on Feb. 19 will likely do so on a unit-level or local level. This is because the agency is fairly small, by comparison with its Air Force and Army Reserve counterparts. Feb. 19th is a very important day to those who serve, their families, and loved ones. Individual Reserve units will schedule their own activities and events to honor Feb. 19th.

The phrase mentioned in the ethos, Semper Paratus, is Latin for “always ready.”